An Evening With Ronnie O’Sullivan!

On Thursday 12th May and Friday 13th May, Ronnie took on a select group of special ticket holders at the Penventon Park Hotel in Redruth and the Indian Queens Working Men’s Club.

Small, friendly, family business Mike Martin Window Systems, who are based in Indian Queens, were invited to sponsor the Friday evening event. As tickets for the event sold out quickly, they decided to auction off two of the allocated tickets and donate 100% of the raffle sales to Cornwall Mind.

One of the tickets raffled was a special ticket which gave the winner a chance to play against Ronnie on the night! 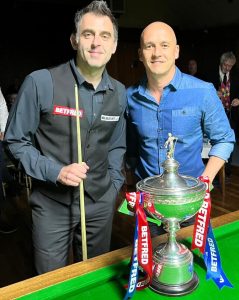 Cornwall Mind Community Fundraiser, Lucy, was also invited by hosts and organisers, Paul and Debbie Broad, to collect donations in person at both events.

On Friday 13th at Indian Queens Working Men’s Club, Ronnie did not disappoint. Despite only just winning his record equaling 7th world title, Ronnie found himself in Mid Cornwall playing against a very star struck and nervous queue of local amateurs. The Rocket pulled no punches and played as if every frame was title deciding. Ronnie produced 5 century breaks in just 8 frames on the evening!

The evening was hosted by the dry witted and always funny, snooker and TV legend John Virgo.

Nick Trevenna, Business Manager at Mike Martin Window Systems, said “A great evening was had by all, and we were very proud to be involved. The fact that we managed to raise some funds and more importantly raise awareness of the essential work that Cornwall Mind do for our community is a real bonus for us. The team at Cornwall Mind were great to work with and we look forward to supporting them with more fundraising and collaborative working in the future.”

Lucy arrived for the cheque presentation and was stunned to receive a whopping £913. Cornwall Mind also have several signed items which will be auctioned to raise further funds.

Paul Reeve, CEO Cornwall Mind, said; “It’s wonderful to see a sports celebrity pull people together around mental health, recognising that it can affect us all. A massive thank you to Ronnie, Mike Martin Windows, their MD James and BM Nick, hosts and organisers Paul and Debbie Broad, and everyone who donated or took part in this fantastic event. Your efforts will make a real difference to people struggling with their mental health in Cornwall.”

Huge thanks to everyone involved!

Scroll Up
Thank you for subscribing to our newsletter. Have a lovely day!